Our activities focus on workshops and conferences related to chemistry and chemical engineering research and education. Stay tuned for updates on the upcoming events.

The ACS Brazil Chapter is supporting the Fifth International Conference on Natural Polymers, Biopolymers and Biomaterials: Applications from macro to nanoscale – ICNP 2017 Rio. The event will take place at UFRJ- Ilha do Governador, Centro de Tecnologia, June 7-9 2017. The event will have great speakers and offers a discount for ACS members.

Great event organized by the ACS Brazil, with the support of ABPol: 1st Pan-American Conference in Polymer Science, 22-24 March 2017, in Guarujá, SP, Brazil. Join us in order to know what leaders in numerous areas of polymer science have been working on in the last years! Registration open, submit your abstracts in www.panpoly.com.br. 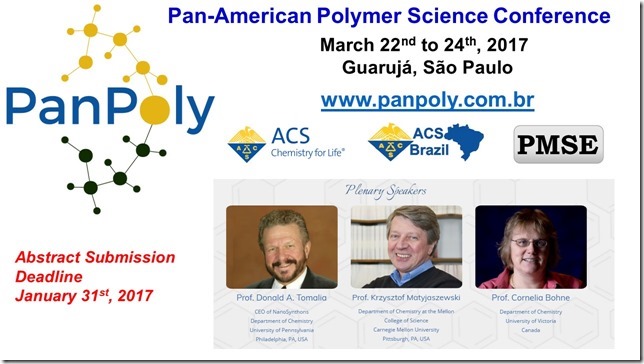 A Chemical Journey with Prof. Cornelia Bohne (U of Victoria, Canada) at the Institute of Chemistry of Unicamp, SP. She presented her research on the chemistry of Cucurbi[n]urils, talked about the new open-access journal in which she is one of the editors, ACS Omega, and gave advice on the preparation of publications and the system of peer-reviewing.

Researchers from Brazil and North-america will present state of the art research in the area of biomass.

Free registration, number of participants limited to the venue capacity.

David G. Whitten, PhD, Professor at the University of New Mexico and Editor of ACS Applied Materials and Interfaces

Jonathan Sweedler, PhD, Professor at the University of Illinois and editor of Analytical Chemistry

Russell J. Molyneux, PhD, Professor at the University of Hawaii and editor of Journal of Agricultural and Food Chemistry

Carlos Roque, PhD, Professor at the University of Campinas – Unicamp